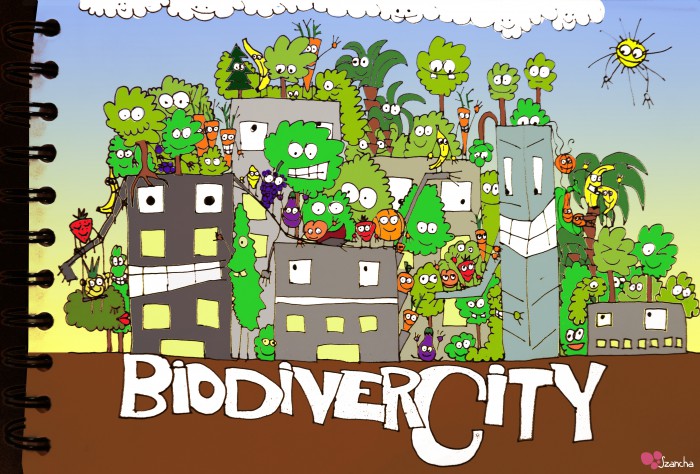 The vision of Anita Szobolodi from Hungary 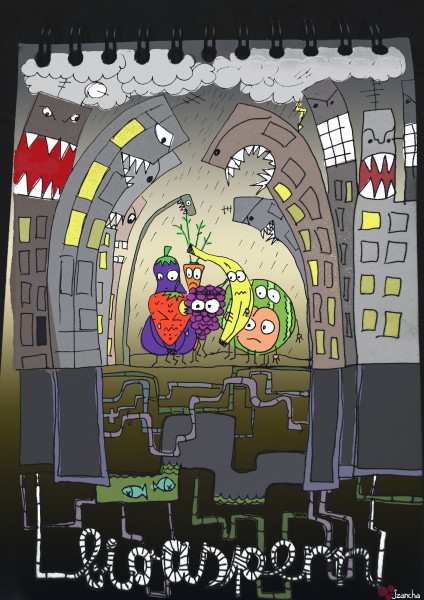 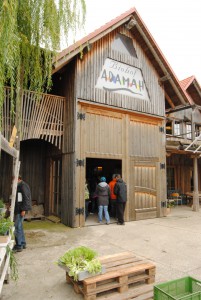 The ADAMAH project have been one of the Austrian projects that we visit on our first day on the Design Course. We’ve been introduced to the main ideas of the project by one of the family members of it, and it was quite interesting to see the different aspects of this successful idea.

The main idea is that they “deliver boxes of biologic products to their clients”, in something that we can define as direct marketing. If at the first moment they delivered twenty boxes, mainly for friends, after 12 years they deliver about 6.000 boxes per week. With the biological production of 92 hectares area, they can produce 65 different crops, and they offer their clients hight quality biological food delivered home. This seems to be a good way to re.create relationships between producers and consumers, in new forms to see the economy. 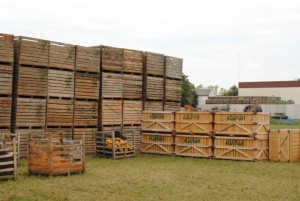 At the ADAMAH we could hear about other innovative techniques and forms to promote the local development with solidarity between producers and consumers. For instance, when they decided to invest in solar system panels, they sold a kind of bonus for the clients, financing the solar panels with social investments. As they produce more energy than is necessary for their production, they sell the surplus for the local government, and with this money they can re.pay their investors, their clients. But they pay only 80% of the bonus in currency, and the other 20% they pay with the products that they have, the food-boxes. There we can see this bonus as a complementary currency, used for the realization of this investment in renewable energy. 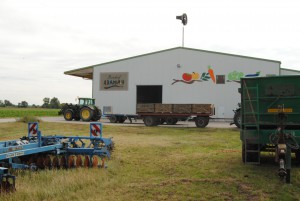 Another point on the project is that they work as a collaborative solidarity network, re.builting chains of the food production. For instance, they produce the cereals in their farm and send them to local bakeries, as a result of this collaboration, they can include breads in the deliver box, gaining in diversity and quality of their services. In a similar idea, in one field they produce vegetables that can be used as animals food, they send this for their suppliers and receive back organic materials to treat the soil. They have economic relations with 200 local farmers, that can provide then with eggs, milk and chicken meat (that they don’t produce by themselves) and so, they can attend the demand of the clients for other biological products. This process is a gain-gain relationship between local producers, as ADAMAH can remunerate their suppliers better than a supermarket would do for the same product. 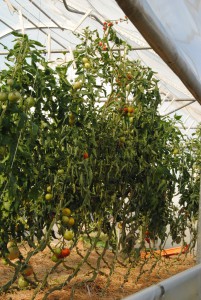 For the consumers, it is also a good idea join this project, not only for the commodity of receiving their biological food at home, for a stable price, but also because they receive informations about the development of the project, the local entrepreneurs in a constant process of support the local sustainable development.

Even thought they are a private company and they are profit-orientated, this project and all this complex system that they’ve been implementing is a good example about the ways local development can be promoted, integrating producers between them and with their consumers. Maybe a good idea to implement, with some adaptations, in the new city of Aspern. 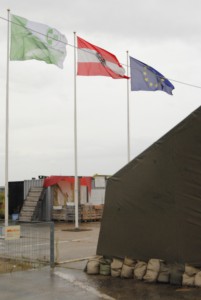 By plane or by train, more or less thirty students have already arrived at Aspern Seestadt this morning, we are still waiting for the arrival of some more. They came here as part of an Erasmus Intensive Summer Course, runned by Professor Werner Kvarda from the Boku University.

Caming from 10 diferent countries, we are taking part on “a big laboratory of spacial planning, in a project that we can discuss how we want to live on the future“, as said Professor Werner at the first meeting that we got.

At the site, we could see the flags of Europe Union, Austria and Boku University, as well as we could feel the freezing winds of the almost desert region. “Here it can get’s really hot on sunny days, as well as really could and windy: it is the problem of a empty space“, said Ute, from the Content Associates. 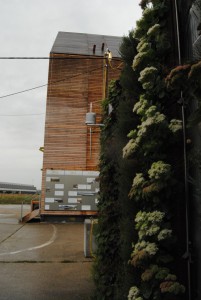 All of us where a little bit curious about the structures that we can see here, and for sure everyone is expecting to get more information about this huge project: built a sustainable city in here. Some structures give us some clues about what we can expect from a permakulture building, as this one from the picture besides, that tries to show how we can built an hydroponic garden, that can cool the inside space and also produce food.

But this is an empty space, but in constant movement. During the last two years this place is receiving different cultural groups as some activities have been made by the Content Associates and other associations, and we are going to talk more about this as soon as we get more informations. Daniel, from the Content Associanets presented some aspects from their work during this period, and he told us that the begining of the occupation of this area was as a container village, and the aim was to bring some artists and the population to start to use this public spaces togheter. 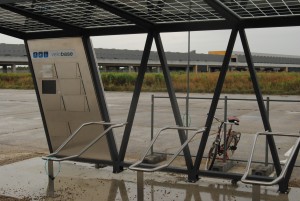 One of this projects was the bicycle-recycling, an important imput for the place, because even thought we can see the metro-line already done, the line will start to run on the next year. For the moment, the visitors can take this recycle bikes from the nearst metro station (for free) and just ride here.

This is the place where we are going to work for 20 days, in a project of re.defining the spacial planning for a new city. The complexity of the issue brought possible solutions apported by different fields; and we are in a really heterodox group: students from spacial planning, solidarity economy and agricultural engeriening, among others, are here to discuss better ways to live in a community-city. 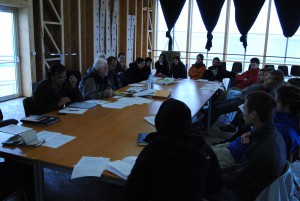 But at this first moment, our attention was on how we are going to live here, for this 20 days. So we got some decisions about how we could organize ourselfs. We formed five groups: one group was responsable to go shopping, as we needed some food and other materials. Other group was responsable for the kitchen, other for the sanitarians and also one for the working space. After a democratic and self-applied positions, we were ready for some sociabilizations. 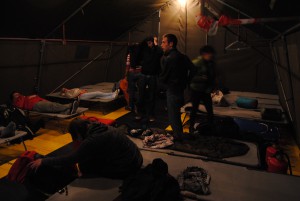 We got dinner and some wine and beer, in a discontracted moment where we can find commun grounds, experiences and talk a little bit about our different cultures. And now, the tuff decision is to go to sleep; at the same time that we want to stay and share, we are tired of the trip, and also, we have to deal with our new beds: in a a militar style. Anyway, I really thing everyone is expecting the day rise to get more information about what, really, we are going to do here. Tomorow, we got more informations.

Being prepared to receive students: with some help from the Military Force 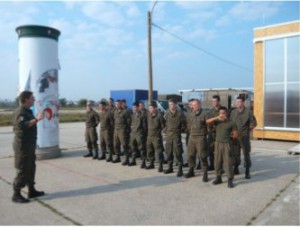 As part of the Permaculture Design Course, 30 students from 10 countries are going to live in temporary barracks at the seaside town. To this end, the National Defence Academy of Vienna, under the direction of Major DI Andreas Berger and Vice Ltd.. Poppe placed 3 barracks with the help of 20 basic military servants. 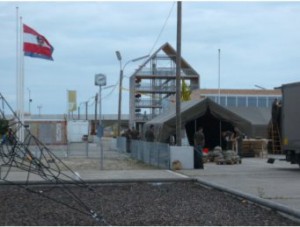 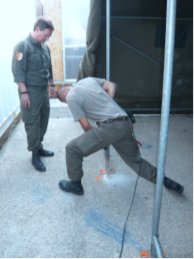 The fixation work on the concrete floor of the former aerodrome of Aspern, where the barracks are now placed. 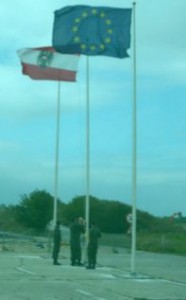 Durint the period of the Aspern Design Course, from 13th to 29th September 2012 the flags of Europe Union and from Austria will blow in the wind at BOKU ground information point.

Shared Communication, what you mean?

“Shared communication is the possibility to participate in a media initiative or collective media action, especially in the work of free and/or journalistic coverage of events of social interest, through the exchange of efforts and contents among media and individuals involved in non-corporate or non-commercial communication. It resists the neoliberal logic of controlled management of communication by counterposing solidarity exchange to the competitive practices of the market and by addressing issues of journalistic, social, cultural or political interest without the commercial bias of the mass media.” (Ciranda, 2012) 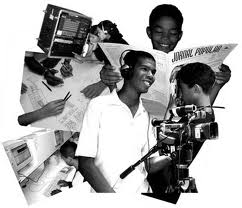 We are going to open the possibility, for all the students and professors that will participate on the Design Course in Aspeern – Vienna 2012,  to also take part on this experience of shared communication. During the twenty days, we are going to produce information, to spreed the good practices and experiences that we are going to take part there.

It is going to be a collaborative and cooperative process where the final result is this blog, and all the information that we can spreed for others that could not join us, but are interested in projects and experiences like this.